Chioma is changing a throw-away society

By enabling people in Nigeria to make money from their household waste, Chioma is cleaning up the environment and showing young people what’s possible. 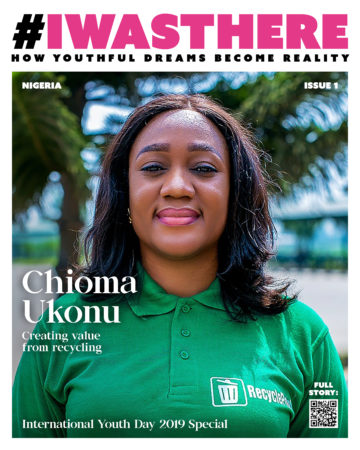 Chioma Ukonu, a young mother of three from Imo state, Nigeria, is wasting no time to get her country recycling. With her husband, she has set up Nigeria’s foremost waste recycling and social benefit venture and has her sights set on cleaning up even more of the country.

Chioma co-founded RecyclePoints after an embarrassing experience in the UK: “We disposed of our waste wrongly, and we were fined. It motivated me to develop a waste management solution for Nigeria.” This was quite a challenge as Nigeria does not – yet – have a recycling ethos, but Chioma, not a person to be deterred, is finding ways to make recycling the norm.

We all need role models

Chioma’s determination and vision clearly run in the family. “My late maternal grandma, Mrs Anastasia Ibeawuchi, was a petty trader with little education but it didn’t stop her from raising the first graduate in her town. She had four daughters – no male child – but made sure they all became university graduates.” Chioma seeks to live a similarly impactful life, and to do this she gave up a promising career in banking.

From recycling to community change

The idea behind RecyclePoints is to motivate people to recycle by creating value from their everyday waste. “We have developed various innovative solutions,” Chioma says, “such as POINT-based incentives, and Internet of Things-enabled technology to reduce environmental and health hazards that are associated with uncollected waste.” What’s more, she is fostering youth employment, women’s empowerment, environmental sustainability, and community engagement.

Chioma had to find a way to get people to see the benefits of waste recycling. The result was the POINT-based incentive model: “We collected recyclable waste from registered post-consumers, and rewarded them with POINTs which could be redeemed for cash and household items.” Thus, Chioma learned that incentives are big drivers of cultural change: they have persuaded people not just to collect their waste, but to separate it into different categories – paper, glass, etc. – which makes recycling much more viable.

In training for business

This is all the more remarkable as Chioma was new to business, so she trained as a young entrepreneur with Oxfam Nigeria in partnership with EDC (Enterprise Development Centre). As well as learning business skills, she was helped by the mentorship of different consultants. “The training also helped in networking as we met young people doing business like us.”

Figures speak for themselves

RecyclePoints has grown from a four-man team to creating over 65 direct and indirect jobs for youths and women. They have more than 200 registered waste pickers and about 10,000 households recycling their waste. They recycle over 75 tonnes of waste each month, have more than 20 corporate partners, and have expanded into new towns. What’s more, many young people at home and elsewhere in Africa have been inspired and mentored by Chioba to start their own recycling businesses.

The success of RecyclePoints hasn’t gone unnoticed. “I was nominated for the Pritzker Environmental Genius award [a UCLA award to recognize a young environmental leader, in the field of environmental sustainability] and won some funding,” she says. The inspirational impact of her work also qualified her for the prestigious Mandela Washington Fellowship for young African Leaders in 2017.

An inspiration to all

Chioma is reaching out to youths and women, so that every African will believe they can do anything they want. “Youths must work every day to be the change they want to see. Start today in doing what you want. Have a vision and work towards it now by taking the first bold step,” she urges. “I want to see young people made stakeholders in society, in such a way that they are integral to the solutions to our problems.”

Chioma‘s story is part of the multiyear campaign, kicked off on International Youth Day 2019 by the Empower Youth for Work program and the Work in Progress! alliance. The campaign aims to support the national influencing work of the respective programs by joining forces with local role models. The ripples of #Iwasthere are spreading out around the world and these stories are proof that change can happen anywhere – we hope they will inspire you, too, to become an active citizen.