Milagros is calling youth to action

By teaching young people their rights and duties, Milagros in Peru is creating a city of active citizens. 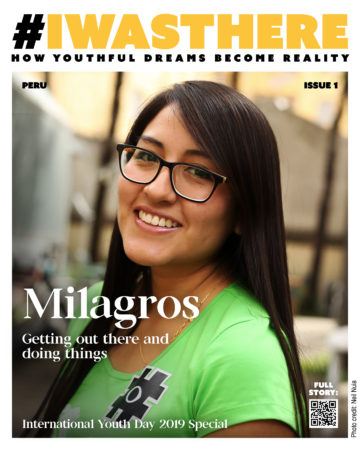 Milagros, a young activist from Peru, is helping to make a big noise about inequalities in her home city, by getting other young people involved: "If we have empowered young people, we can do a lot.”

Milagros Ticliahuanca, 24, lives in Carabayllo, the most extensive district of Lima, Peru’s capital. People in the area do not have the same opportunities as in other districts of the city, but Milagros grew up knowing that it didn’t have to be that way. "As a member of the union of the Municipality, my dad had to watch over the rights of all the workers,” she says. “He instilled in me the idea of fighting for the common good."

So Milagros became politically active from an early age and studied Political Science at university. While there, she realized the size of the battle ahead: "I was volunteering at a fair to raise public awareness about democracy, when a lady told me that the only thing I should do was take care of a husband! That had a big impact on me.”

Milagros found confidence in the company of others who thought similarly to her. She joined Red Interquorum, an organization promoting the empowerment of young people with democratic values. "We train children in schools,” she explains, “with workshops to raise awareness about governance and democracy, and we teach them what their duties and rights are. I feel that there will be a multiplier effect; these children will tell their parents and the idea will grow.”

From child to citizen

She also hopes that the children will go on to do more themselves into adulthood: "If children know their rights, they will be super-empowered citizens who will know how to elect their representatives in municipal and central government and will be able to do thousands of things." But not everyone wants to involve youth in such a way. Milagros tried to promote a Youth Participation Council in Los Olivos, northern Lima, but the mayor did not want such dialogue. Instead of becoming frustrated by this opposition, Milagros worked to expand youth participation in other municipalities

A laboratory for change

Milagros joined Actúa.pe, a communication and activism platform composed of 23 social movements and organizations including Oxfam in Peru connecting, monitoring and amplifying citizen action against inequality in Peru. Milagros finds its approach very effective: “Actúa.pe says a lot through images and thus allows me to promote information to those around me,” she says. Their nationwide  ‘Actua Labs’ are a training and exchange space between experts, activists and youth groups, focusing on environmental, gender and economic justice. Milagros organized one herself, “with the idea of ​​strengthening university activists, who do not necessarily recognize themselves as such."

Recently, Milagros had the opportunity to take part in a forum in Florence where young people, joined by Oxfam, developed scenarios for reducing inequalities and ending poverty. Milagros is fired up by the experience: "I feel fortunate for being part of this ‘driving core’ and will be able to replicate everything I learned with my colleagues in the Red Interquorum.”

Milagros recognizes how privileged she is. "I spent months without a job,” she says. “But I am a professional, and if it is complicated for me, what is it like for those who cannot access university studies? The teenage pregnancy rate has increased and childcare keeps young mothers away from the opportunity to get a paid job or finish their studies."

Youth are the future

Any activism for empowerment has to be backed by concrete opportunities. "We want to tell citizens that we have real proposals, that we can generate change. We are young, we are prepared, we have serious ideas. We have many things to do."

Milagros‘ story is part of the multiyear campaign kicked off on International Youth Day 2019. She is active in a communication and activism platform that connects, monitors and reinforces civil actions against inequality in Peru, Actua.pe. The campaign aims to support the national influencing work of the respective programs by joining forces with local role models. The ripples of #Iwasthere are spreading out around the world and these stories are proof that change can happen anywhere – we hope they will inspire you, too, to become an active citizen.