Striking out for the future

By organizing children’s strikes in the Netherlands, Jesse is making sure the climate crisis can’t be ignored. 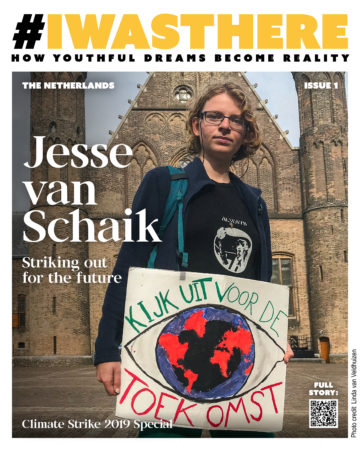 Over the last year, Jesse has definitely woken up to the dangers of climate change and isn’t letting her age or school responsibilities get in the way of doing something about it. She’s become an outspoken activist and is clear about where her responsibilities really lie.

Waking up to climate change

Jesse (14) lives in Amsterdam, Netherlands. A year ago, she was aware of the world and its problems but hadn’t been moved to action. Then she saw the news about the strikes in Belgium with thousands of students on the streets, and the environmental disasters in Mozambique which touched her: “I knew it was a result of climate change,” she says. “The people there couldn't do anything about it, but we could.”

With no like-minded peers, Jesse made a poster and went on strike on her own. She then took part in the big strike by Youth for Climate in The Hague and realised that sitting on her own didn’t make much sense. The next week, around 500 children joined a strike in Amsterdam, and Jesse gathered together the first students to create Fridays for Future, a group taking action on climate change. They organized weekend demonstrations and weekday strikes, and linked up with national teams. At the moment, they are working towards the strike on 27 September. “Everything else has fallen away!” Jesse says wryly.

Giving life to the cause

Fridays for Future has taken over Jesse’s life. She deals with emails before school then attends meetings afterwards, cycling between them and grabbing something to eat whenever she can. “I write reminders on my hand all day long – sometimes they’re covered!” she says. There’s been a mixed response at school; her teachers are happy as long as she passes her tests, but her fellow students don’t really understand. “Everyone thinks I'm weird, but in an admiring kind of way!”

Jesse feels there’s a problem with Dutch youth; they have everything, don't need anything and feel nothing, unlike the young people in Mozambique, who lost their homes and know what it’s like to experience a climate disaster.  She is inspired by other crazy people like her, working in their free time. Fridays for Future Amsterdam and other groups strike at least once a month throughout the Netherlands, and Jesse recently attended an international gathering in Lausanne with strikers from all over Europe, to learn and make plans for local and global actions. Jesse’s actions may seem a drop in the ocean, but she has a ready response: “We don't know for sure if it makes sense, but doing nothing certainly doesn't. It's not perfect, but at least we do our best.”

Jesse and her activist friends are not the people to provide solutions, their role is to make governments take the necessary action. “Above all,” she says, “we just want a good climate policy. We want the government to listen to the scientists and do what it must to honour the Paris Agreement because it contains exactly what is needed.” She wishes more Dutch youth would get involved because it’s their future at stake – they will face the rising temperatures – but she doesn’t think it should be left to children to solve alone.

“What I hope is that I can inspire other people. That they think 'this is possible'. A lot of people don't do anything because they think it's already too late. But it's not too late yet; we are on the edge, but it is still possible. So I hope that other people think 'if she can do it, then I can do it, and then it won't be that hard.’

Oxfam (Novib) supports The #FridaysforFuture climate strike movement started by Swedish teenager Greta Thunberg who kickstarted a global conversation on the climate crisis. Greta and other youth activists put out a call to ask adults to join in the strikes and actions in a special week of action, 20-27 September.

Currently, far too little is being done to achieve the ambitions of the Paris Climate Agreement. It is of great importance that governments around the world increase their commitment. Countries must not only reduce their greenhouse gas emissions but also contribute with financial support to developing countries that must adapt to extreme weather due to climate change. The Netherlands, for example, has to contribute € 1.25 billion per year to this but is not yet doing so. Join Jesse and other young people in the streets for global climate strikes and a week of actions to demand an end to the age of fossil fuels and climate justice for everyone.

Jesse ‘s story is part of the multiyear campaign, kicked off on International Youth Day 2019 by Oxfam Novib. The campaign aims to support national influencing work by joining forces with local role models. The ripples of #Iwasthere are spreading out around the world and these stories are proof that change can happen anywhere – we hope they will inspire you, too, to become an active citizen.