Muzamil is taking technology to the field

Farmers in Pakistan are finding that Muzamil’s modern ways can enhance their old farming practices and bring impressive returns. 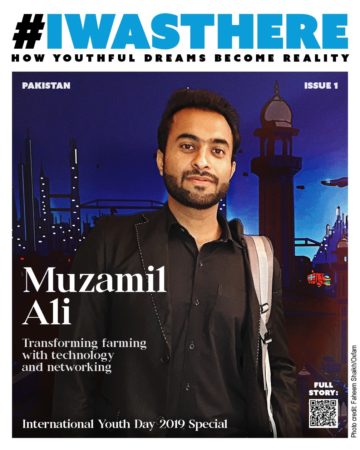 For as long as he could remember, Muzamil Ali, 24, says that he was fond of gadgets. “I grew up in awe of my grandfather working in his lab, building transformers; it made me determined to become an inventor one day.” And now he’s doing just that.

To achieve his dreams, Muzamil taught himself software development, and picked up work wherever he could to save money. “I taught Science in a primary school when I was 17; later, I worked as a freelance software developer, helping companies run more efficient systems,” he says. Then a huge opportunity came up.

In 2017, Muzamil was studying for a degree in Computer Science in Layyah, when he heard about The Indus Entrepreneurs (TiE) inaugurating the Youth Innovation Hub, under Oxfam’s Empower Youth for Work (EYW) project. TiE organised a start-up competition for business ideas with great potential. Muzamil applied immediately. His idea was to automate farming in Pakistan by raising awareness among farmers about innovative techniques and common mistakes in farming practices, while also fund-raising for them. He also hoped to provide technical support – installing sensors and effective drainage and irrigation systems – to improve productivity.

When Muzamil’s idea was accepted for further development as part of the competition, he was overjoyed. “Everyone has great ideas regardless of their background,” he says. “But few get the opportunity to showcase them and make so many useful connections in the process.” From the beginning, regardless of the tough competition, Muzamil felt confident that the idea he had spent years of research and effort on would make an impact. “I was fully aware of all the practical implications of executing my plan which is what made me stand out from the crowd,” he emphasises. Eventually, after jumping through all the competition hoops, Muzamil and his team (including Nazra, Product Designer, and Ammara, Sales Head) were triumphant; his start-up idea, National Agriculture Aqueous Solution, had won!

Out with the old

From experimenting with gadgets as a child to winning a start-up competition, and gearing up for his first established socially-driven business, Muzamil feels ecstatic about the future of farming in Pakistan. He says that farmers in Layyah often do not have access to the help and advice they need, for instance, watering seeds in winters is not damaging for their crops as is commonly believed. “The biggest challenge wasn’t informing them about modern farming techniques but persuading them to abandon outdated methods,” he says.

Today, Muzamil considers the biggest takeaway from the experience to be the network of experts and mentors he can draw on. “I can’t sell my idea without gaining the public’s trust; now with TiE’s label attached to my name, I am confident that my products will be far more easily accepted,” he says. While Muzamil has had to face many challenges in implementing new techniques on farms, including unexpected technical failures of his equipment and reluctance on the part of farmers to entrust him with their finances, he has spent the past year building his reputation in Layyah. “I recently convinced a prominent, well-to-do farmer to use a mobile app for smart farming in his fields and he was thrilled to see the results; almost immediately, word about my services spread, and more farmers were willing to learn about the app”, he says happily.

The future’s in farming

As Muzamil starts to establish National Agriculture Aqueous Solution’s first outlet to build credibility among local farmers, his thoughts are on the future: “I hope that one day all farmers in Layyah see the benefits of using automated farming in fields, and use my techniques to improve their productivity and work standards.”

Muzamil‘s story is part of the multiyear campaign, kicked off on International Youth Day 2019 by the Empower Youth for Work program and the Work in Progress! alliance. The campaign aims to support the national influencing work of the respective programs by joining forces with local role models. The ripples of #Iwasthere are spreading out around the world and these stories are proof that change can happen anywhere – we hope they will inspire you, too, to become an active citizen.