Through her work and activity on social media, Dilah is raising awareness among young people that they must act to create change. 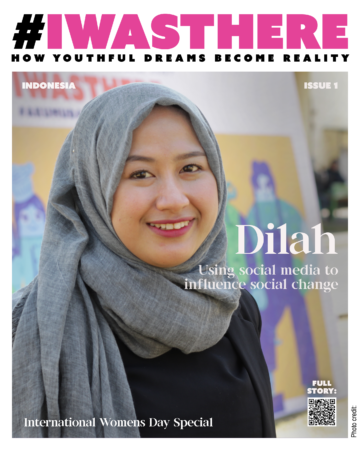 Dilah believes in the potential of the young generation, but they are often seen as ‘still young kids’, she says. Instead, Dilah sees that they can be a powerful force influencing decisions and change, and the key to achieving the world’s Sustainable Development Goals (SDGs).

A professional in development

Fadhilah Trya Wulandari, 27, known as Dilah, is a determined woman with three different positions at Hasanuddin University in Makassar, Sulawesi, Indonesia. She is a Special Assistant to the Dean of the Graduate School in the field of International Cooperation; a Project Support Officer in the Program Associate Sustainable Development Goals Center; and a Junior Research Fellow at the Center of Excellence for Interdisciplinary and Sustainable Sciences.

These are Dilah’s current influential roles, but her interest in development issues began in high school where she learned about the importance of mutual respect towards religious differences and towards minorities. These early experiences began to build her personality and drew her attention to different social issues. She was motivated to learn about how to connect with people while maintaining the rights of all, by holding the principles of respect, awareness, and tolerance.

With this motivation, Dilah pursued a masters study in gender and conflict in the Netherlands. While there, she and five friends from different countries created a social media platform for SDGs, Development Dictionary, to provide information about social issues and increase self-awareness among young people from the millennial generation. Dilah and her friends hoped that with increased awareness, young people would have a better understanding of the world, which would lead to a change in actions.

To reach even more people, Dilah has initiated a social movement with the hashtag #gakpakeplastik (#noplastic) on Instagram with her friends in Makassar. It focuses on environmental problems, convincing followers to replace single use plastic with tote bags, tumblers, and bamboo straw. Dilah also makes use of her personal Instagram account to provide a platform to discuss social justice issues and to share reading materials.

Sensitive to beliefs and opinions

Influencing public views is easier said than done. Dilah’s audiences are not usually even aware of the issues, let alone interested in them or ready to take action. For example when discussing ‘cat calling’ (street harassment towards females), her readers may find it normal, not problematic, or even acceptable. And there can be a backlash when she raises sensitive topics such as terrorism. "We must be sensitive about what the person can accept and where we can continue the conversation,” she says. “I often get harsh, loud comments but I still believe that we should not judge, and it is ok if we have different opinions. It's always about the way we perceive things.”

In the hands of youth

And the way that we perceive young people can hold back the next generation taking a role in society. Dilah is determined that perceptions can change and particularly highlights the great power of young women, challenging the social norms that stop women realizing their potential. “As a youth, I'm sure the young generation will be more innovative in achieving SDGs,” she asserts. “They are aware of issues that many older adults might not be aware of.” And for the younger generation, the most important things are issues of gender equality, children’s rights, tolerance of ethnic differences, and race.

It’s all about being human

“Development is more than just economy or infrastructure,” Dilah says. “It's all about humans, about society, about women, about men, transgender, babies, children, mothers, it's all development. It’s not just about physical development, it’s also about the human development."

Oxfam Novib's Empower Youth for Work project is aiming towards the socio-economic empowerment of youths in the rural areas of Bangladesh, Pakistan, Ethiopia and Indonesia.