Abdinasir is getting the nation reading

Through his own enthusiasm for books, Abdinasir is showing other young people that within the pages they will find a world of pleasure and knowledge that could change their lives. 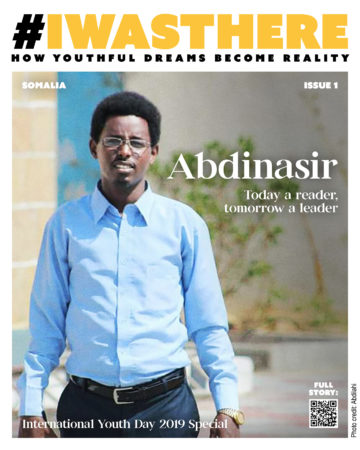 Reading is not a part of the culture of the Sahil people – they have a strong oral tradition and are reluctant to change. But one young bookworm could see the value that literacy would bring, and set about getting people to open up a book.

Too hot to learn

Berbera town, thanks in part to its strategic coastal location in the Horn of Africa, is Somaliland's economic hub and has recently attracted 442 million USD of foreign investment from World Development Programme. But Berbera is a sweltering town, with temperatures often soaring to 43° centigrade; that makes it very difficult for young people to go to school and study, thus denying them the chance to fulfil their potential.

Education for a better future

Abdinasir Ali Abdirahman, 26, grew up in a large family in a remote, rural area of Somaliland. In spite of his family's meagre finances, they managed fund him through school, where he worked hard, excelled in his studies and achieved exceptional grades. This enabled him to join the prestigious SOS Sheik school, where most of the country’s leaders studied. From there, he went to Berbera and became a motivated youth activist with the determination to change the culture of the town.

Big dreams for a town

Throughout, Abdinasir’s passion has been reading, but he is very unusual – it is not a popular practice in Berbera district in general. This wasn’t going to put Abdinasir off. He had gained so much through reading for study and pleasure himself, that he was inspired to promote the culture of reading and books among his peers. It would be quite a task, he knew. “Though life was not easy in Berbera, I endured it and developed a sense of confidence,” he said. “It gave me a feeling that I can really achieve something in my life.”

How do you get a town reading? Abdinasir actively advocated the establishment of ‘reading clubs’, bringing youths together in public halls where they could read books. Simple. But it’s not just about reading. The real purpose of the clubs is for members to share their life stories and ideas each week (just as Abdinasir is here!), and to contribute to the well-being of the whole community by giving the youths somewhere to use their time wisely.

The mayor of Berbera, proud of Abdinasir's tireless efforts, recognized his achievements by appointing him as the head of educational supervision in a district of the town. The mayor then followed this by nominating him as the director of Berbera’s only public library – the nation’s largest library, which was well-equipped and furnished by the local authority. Abdinasir has maintained strong relations with hundreds of Berbera youth, by holding reading sessions in the library, mostly focusing on Somali literature. Abdinasir also provided an outlet for young people’s ideas and concerns, by pioneering monthly debates where they could talk about social ills, including the problems of youth gangs.

A door to a different world

Abdinasir dreams of helping marginalized youth and children in Berbera through reading. By strengthening and enhancing the reading culture of these young people, he aims to sharpen their imaginations and creativity – opening the door to different worlds. From this culturally rich beginning, Abdinasir envisages building a band of productive citizens who promote the nation’s development and productivity through the endorsement of reading.

The strength to read on

Abdinasir’s great dream would not have yielded fruitful results if he had not shown great resilience in the face of the negative societal attitude towards reading. “Reading is my world because it has broadened my horizon and social outlook,” he says. “Without a book on my lap every day, I don't know where I would have reached today. One day I will realize my dream of bringing all Sahil people into the library.”

Abinasir‘s story is part of the multiyear campaign, kicked off on International Youth Day 2019 by the Empower Youth for Work program and the Work in Progress! alliance. The campaign aims to support the national influencing work of the respective programs by joining forces with local role models. The ripples of #Iwasthere are spreading out around the world and these stories are proof that change can happen anywhere – we hope they will inspire you, too, to become an active citizen.