Duressa does the chores at home

By turning tradition upside-down, Duressa has reduced the burden on his mother, and is spreading the word for other young people in Ethiopia to get busy too. 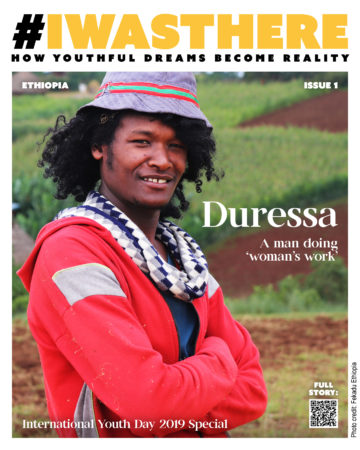 Duressa Yakob would be the first to admit that he was not an easy youngster: “I was showing some unacceptable behaviours like lack of respect for my parents and insisting they give me money for an unreasonable expense. I had no plan and no vision. I was just living a random life.” What turned him around was contact with the Empower Youth for Work (EYW) program.

Duressa, 25, lives in Shashamene district, south of Ethiopia’s capital, Addis Ababa. He grew up on the family farm, and was aimless and dependent on his parents until he joined the ‘community conversation’ conducted locally through the EYW program. He has become one of the most active participants and the conversations have opened his eyes (and ears!) to issues such as Gender Based Violence, Unpaid Care Work, Sexual and Reproductive Health and Rights, and Climate Change.

“The topic that impressed my mind and took my attention most,” he says, “was the discussion on unpaid care work. Before it, I never noted or recognized the work load on my mother.” Afterwards, he says he was ashamed to enter the kitchen even to look for a glass to drink water. But recognizing a situation and feeling ashamed was not enough. Duressa not only changed his attitude to existing social norms, but also questioned his life-style: “The first session of the conversation was the turning point of my life. I’ll never forget my feeling at that time. I was impressed by the issues raised and discussed by community members and gradually started to think about my contribution,” he says.

So what has he done? He’s taken on many of his mother’s domestic chores, from cooking to childcare. “The only thing that I cannot do,” he says, “is child bearing and breast feeding. This is not naturally gifted to men!” This hasn’t gone unnoticed – it is very strange among the local community to see a man doing ‘a female’s job’, and many thought he was mad. But Duressa was undaunted and is now one of the exemplary youths who has made significant attitudinal changes due to the discussions.

The good thing is that local resistance did not last long mainly because of Duressa’s commitment to the change. He uses every opportunity to influence other youths and the local community, for instance, during encounters when farming, worshipping, or attending other community gatherings.

He got information and posters from the EYW program staff and is using these to teach others. In fact, he’s become quite a celebrity; wives and parents use him as an example when trying to influence their husbands and young children.

All this time, Duressa has been unemployed apart from working on his parents’ farm, although he is trained in road construction. He would like to do more to develop his drawing skills and passion for photography; maybe become the next Leonardo Da Vinci. More practically, he has plans to open a cell phone maintenance shop.

Duressa’s sights are not just set on the local community. He has called upon the government and other stakeholders responsible for youth development to be more responsive to the demands of youths themselves. He also has a call for his youth peers: “That they should free themselves from the sense of dependence, and focus on creating their own jobs; that they should use any support from government or NGOs, effectively; and that they should develop the culture of volunteering and contribute to solving the socio-economic problems of their community.”

Duressa‘s story is part of the multiyear campaign, kicked off on International Youth Day 2019 by the Empower Youth for Work program and the Work in Progress! alliance. The campaign aims to support the national influencing work of the respective programs by joining forces with local role models. The ripples of #Iwasthere are spreading out around the world and these stories are proof that change can happen anywhere – we hope they will inspire you, too, to become an active citizen.