Taking up the challenge

Daphne found out that the complex issues around changing (inter)national tax policies are actually quite exciting in their own right, and vital to the fight against extreme economic inequality if a little dry to promote to the public. 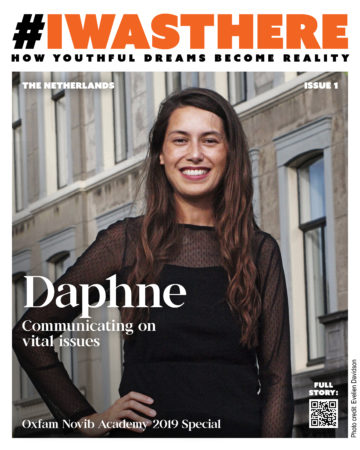 A mixed nationality background first awoke Daphne’s awareness of different cultures and the interconnectedness between different parts of the world. She has gone on to study those links further and to campaign for fairer national and global systems.

Daphne Rozenburg, 24, is half Dutch, half Indonesian which, she says, makes for “a rather interesting personality mix; [part] blunt and direct, while maintaining an intense need to be caring and polite.” Growing up with two cultures meant she always understood that the world had more to offer, and she had some experience of this when the family spent three happy years in the Caribbean. It continued when she spent a semester in San Diego, USA, during her Communications degree.

Daphne started thinking more about development issues during a Women’s Studies class at San Diego State University. They learned about Wangari Maathai, a Kenyan political and environmental activist and founder of the Green Belt Movement, and that the environment, democracy, and peace are linked so that many of the challenges we face today are intertwined and cannot be fixed separately. “I left class that day feeling unusually excited,” Daphne says. “Ready to change things, do something for the better.”

An opportunity with Oxfam Novib

Back in the Netherlands, Daphne joined the Social Development Department at the Dutch Ministry of Foreign Affairs, where she learned more about development cooperation. Intrigued, especially, by sustainable and inclusive development, she started an internship at Oxfam Novib. The Oxfam Novib Academy enabled the interns to keep in touch and learn from each other although they went to work in different departments. Daphne worked on fair taxation within the Even It Up! campaign team.

Finding the excitement in taxes

Daphne took on this challenge because fair taxation was the thing she knew the least about! It seems a poor relation when compared with the excitement of fieldwork or disaster response, but the complex issues around changing (inter)national tax policies are actually quite exciting in their own right, and vital to the fight against extreme economic inequality if a little dry to promote to the public. Daphne’s role in Communications and Campaigning meant she met this problem head-on.

Daphne’s favourite project was when she traveled to Paris and Brussels alongside two of the tax advisers. “My goal for both trips was to capture the essence of the vital advocacy work that goes on within powerful institutions,” she explains. “But in a light and approachable way. This work is absolutely crucial.” Her time with the Even it up! campaign made Daphne a truly active citizen.

Stepping outside the comfort zone

“To me, active citizenship means caring,” Daphne says. “Fighting for something bigger than yourself. It means fighting for the rights of others, knowing their battles might be very different from your own. Working at Oxfam Novib has allowed me to care for problems I will never face, and for people I will never meet. It has forced me to step far outside my comfort zone.”

The fight goes on

Today, Daphne is a Youth Ambassador for The One Campaign (a global movement to end poverty) and she’s planning to study Political Communication at the University of Glasgow from September. “I am continuing the fight,” she says, “by advocating to keep the focus of EU aid on eradicating poverty, and providing health services, education and economic empowerment to those who need it most.” Just as Oxfam is helping others around the world to learn the things that help them move forward.  Daphne learned more about international development issues during her time with Oxfam Novib and, as a result, will continue “sparking positive social change through political communication”.

The Oxfam Novib Academy (ONA) is the hub for internships within Oxfam Novib. Since 2015 ONA has been bridging academia and practice within the field of development and humanitarian work. To date, over 130 students have interned with the Oxfam Novib Academy. More information and blogs written by current and former interns can be found here.

Daphne ‘s story is part of the multiyear campaign, kicked off on International Youth Day 2019 by Oxfam Novib. The campaign aims to support national (influencing) work by joining forces with local role models. The ripples of #Iwasthere are spreading out around the world and these stories are proof that change can happen anywhere – we hope they will inspire you, too, to become an active citizen.